Perfecting the Capital of the Archipelago 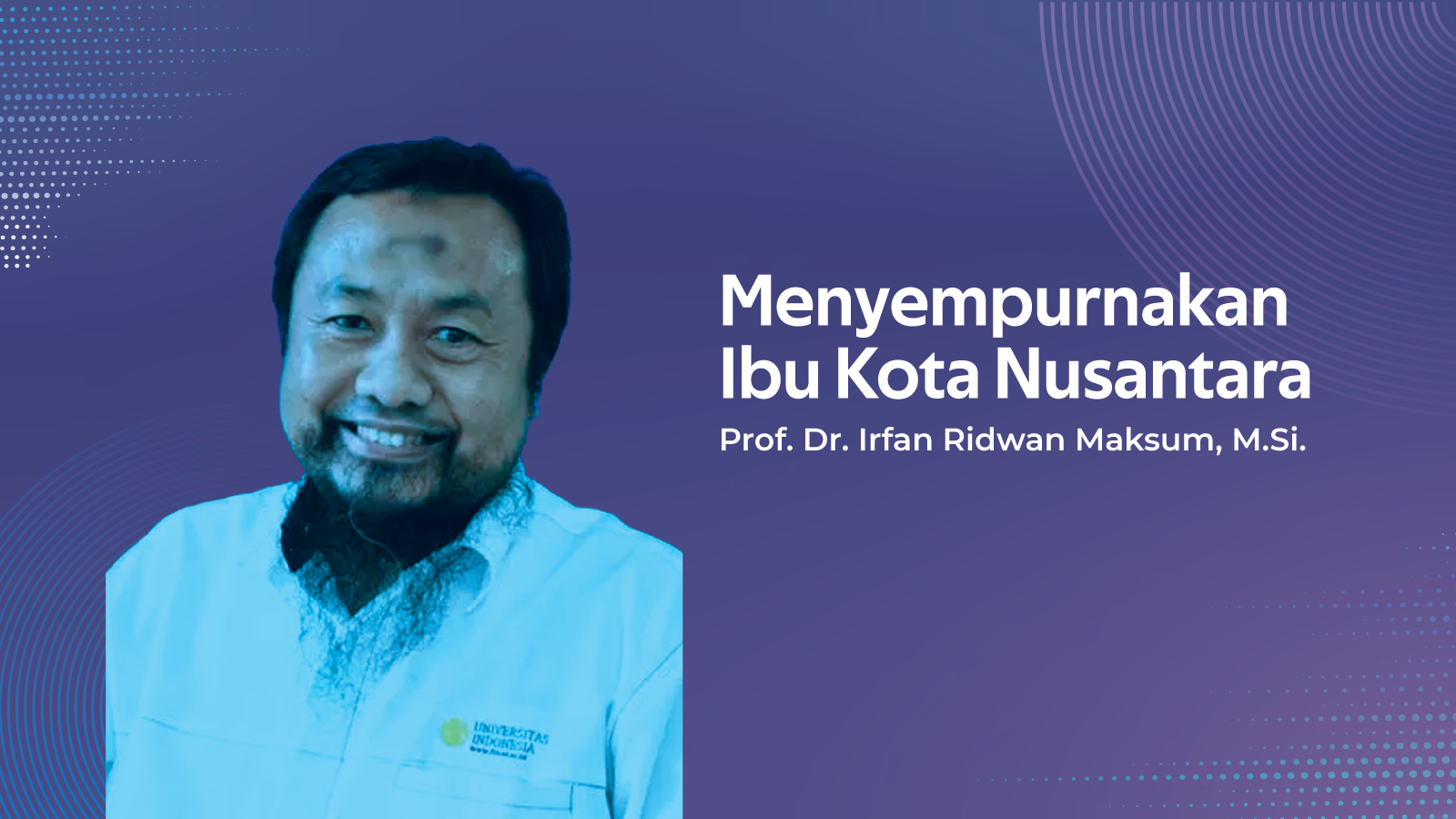 President Joko Widodo has named the candidate for the capital city of the Republic of Indonesia, namely Nusantara. This name is believed to be well received, in the midst of the drafting of the IKN Bill.

The design of the strategy to realize the ideals of the law (UU) which is currently being discussed is also being accelerated and prepared by a team that has been formed by the government. Apart from the material of the law and the term Nusantara which was also welcomed by the wider community with various responses, the Indonesian people need certainty, perfection, and smoothness of the ideals of having the nation’s capital city (IKN).

From the perspective of urban science, the IKN that is being worked on is a new city with the status of the nation’s capital city. The new city of the archipelago is present in the midst of the development of national cities that do not have a city-specific legal umbrella.

This void has long existed in Indonesia, which has relied on the regulatory basis of the Regional Government Law (Pemda). Meanwhile, IKN Nusantara does not also refer to the Regional Government Law according to the initial draft that was included in the discussion in the DPR RI. This new city of the archipelago is an area managed by an institution in the form of an authority with a ministerial-level administrator. This new city is a special territory, not an autonomous region.

Such a design deserves contemplation, especially on the basis of a constitution that does not recognize regions without regional autonomy in the territory of the Republic of Indonesia, according to Article 18 of the Constitution. Article 18B also refers to regions with autonomy with special characteristics that remain within the framework of autonomy, not without autonomy.

The capital city of the archipelago was carefully prepared and accelerated in the shortest possible time with great energy, even though it has even been considered to move the state civil apparatus, ministries and institutions with all the supporting resources.

It can be estimated that the city of the archipelago will emerge in the midst of many natural cities in terms of regional economic activity that is growing massively. Nusantara City will grow equally with cities such as Jakarta, Surabaya, Semarang, Bandung, Medan, Makassar and natural new cities such as Meikarta, Lippo Karawaci, Serpong, Deli Serdang, around Surabaya, and Makassar.

For the record, cities in Indonesia that have certainty in their government are cities that have autonomy, there are more than 90 cities. While those without an autonomous government are still under the regency area, currently there are 2000 cities throughout Indonesia. Generally small towns and medium cities, as well as new towns independent cities, such as Sentul City, Meikarta, and BSD.

The city of the archipelago emerged with the dominance of the main political aspect with the direct status of the capital city. Nusantara City, if it runs, must go hand in hand, not just be the center of the national government. The magnet for the rotation of goods and services in all cities in Indonesia will also make adjustments in the future with the emergence of the Nusantara City.

The regulation of IKN by law does not solve the void of the legal umbrella for cities in a national draft. The draft of the IKN Law only regulates the candidates for the capital of the Republic of Indonesia individually, not at the same time as regulating cities nationally. In fact, it should first be the cities nationally, then the cities individually.

With these conditions, do not expect a rapid and massive distribution of development. The possible impact that even large cities that already exist will be the initial obstacle to the growth of IKN. Many cities will feel the loss to grow IKN so that Nusantara City will become at least a medium city, so that it can be comfortable and efficient internally.

The absence of a national urban legal umbrella can have an impact on IKN governance–which if referring to the initial draft it is managed by the authorities–and will rely on government intervention to create massive subsidies for IKN from the growth of other cities. This must be observed so as not to kill the development of cities that have already grown, especially the existing small towns.

In the absence and left vacancy of the national urban legal umbrella, the growth of cities outside the IKN will work with the pattern of the law of the jungle. Big cities will eat medium cities, medium cities will eat small towns, and so on small towns will eat villages. The accumulation of capital in which an urban system theater takes place is increasingly evident (McGee: 1985). The city of the archipelago may become an enclave, living alone, if it is not accompanied by thinking about the national legal umbrella for the Indonesian urban system.

It is time for the government to think about not only Nusantara City which is wrapped in the IKN Law individually, but nationally it is also necessary to regulate the governance of national urban institutions like village-related arrangements. It is time for the Indonesian people to have their own Urban Law. This Urban Law will later become the basis for the IKN Law and the Law on Other Cities individually so that city development is directed, including national development. 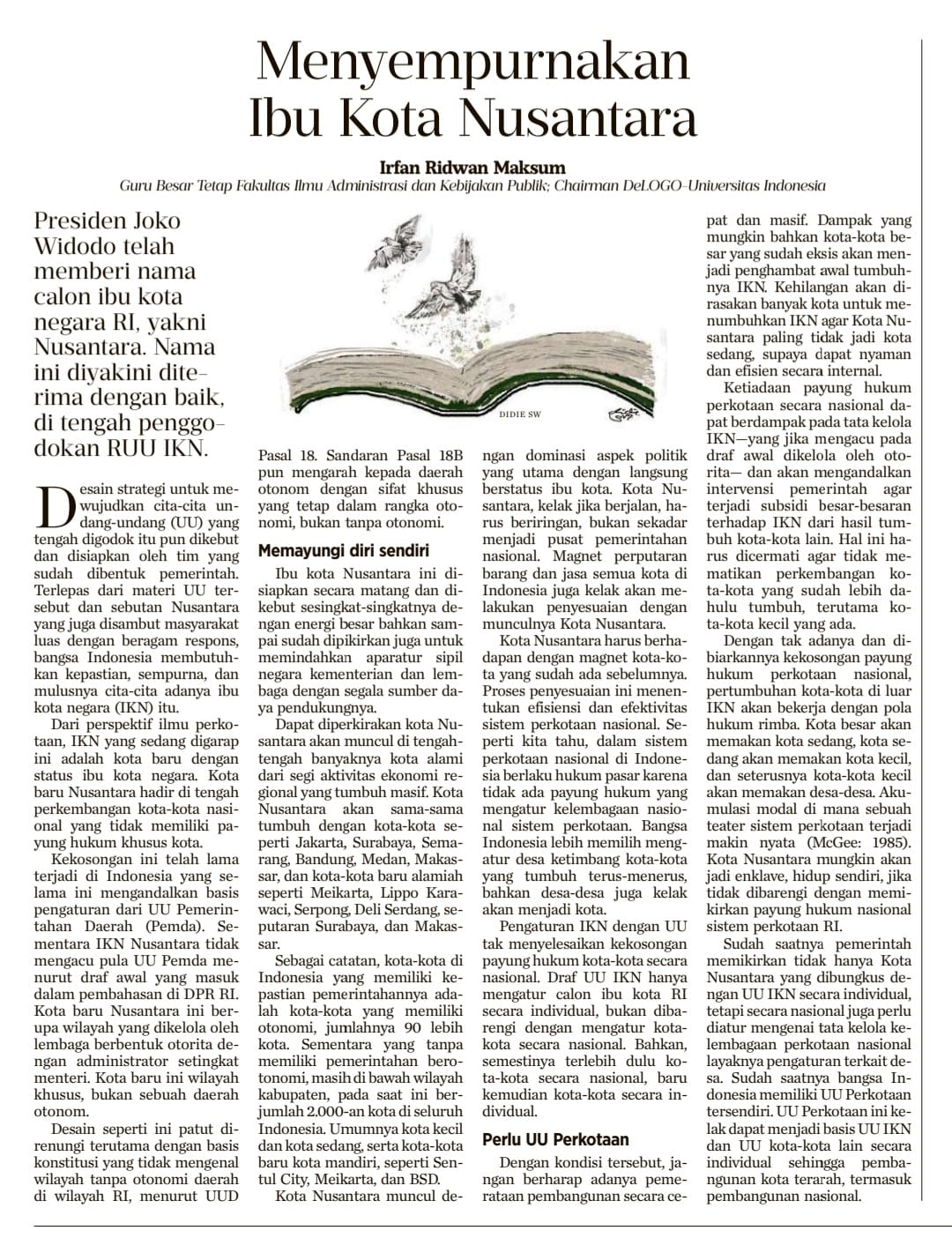