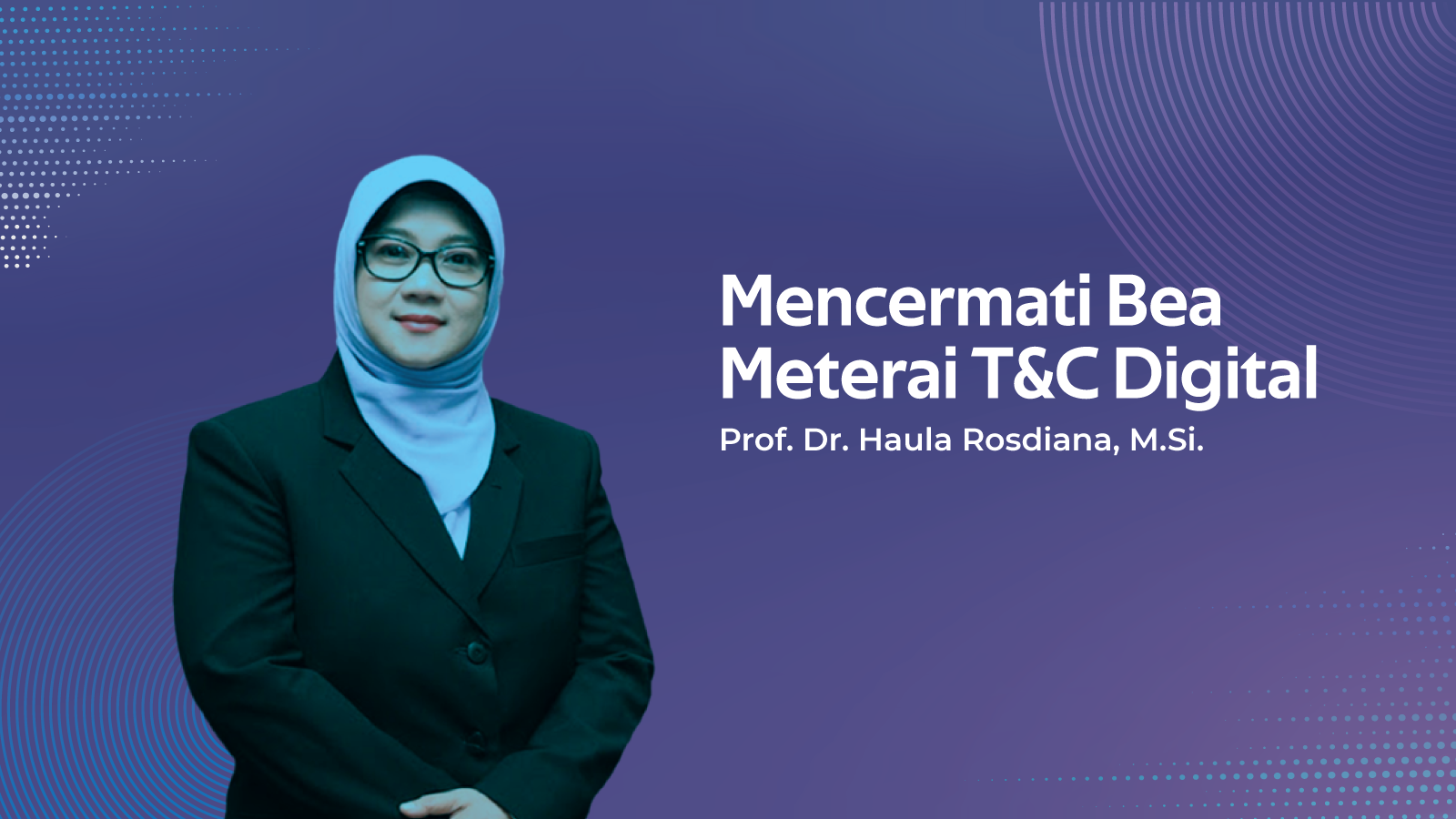 Expansion of Stamp Duty (BM) objects as regulated in Article 3 paragraph (2) of Law no. 10/2020 concerning Stamp Duty (UU BM) causes anxiety for digital economy business actors, especially related to the issue of Terms and Conditions (T&C). It is feared that the T&C will be considered a civil document that is the object of BM collection, even though T&C is one of the commonplaces in the digital economy which is currently being pursued to develop and even increase.

Even President Joko Widodo targets Indonesia to be able to control 40% of Asean’s economic potential by 2025 so that the contribution of the digital economy increases to 18% of Gross Domestic Product (GDP) in 2030. Currently, its contribution is still in the range of 4% of GDP, so the president directs the acceleration of development of the digital economy ecosystem, both infrastructure, governance, to regulations and human resources (HR).

In the Academic Paper (NA) of the Stamp Duty Bill, the opinion of Augusto Lopez Claros from the World Bank states that policy makers must find the right balance between increasing revenues and ensuring that tax rates and compliance costs do not hinder public participation in paying taxes or reduce interest in doing so. business activities (NA, p. 75). Based on Claros’s opinion, of course the formulation of T&C regulations as a new BM object must also be ensured that it does not hinder or distort business activities. Moreover, a lot of research and data shows that e-commerce has helped MSMEs a lot to develop and even survive in the midst of a pandemic. Therefore, carelessness in making T&C an object of BM will actually increase the cost of taxation including compliance costs that must be borne by taxpayers and/or business actors; enforcement costs of the tax authorities and; and policy costs, in the form of trust and legitimacy.

It is understandable if there are concerns from e-commerce business actors and other digital platforms because BM will affect costs and cashflow because the term “Bea” indicates that BM is an indirect tax (NA page 12), so the tax burden can be transferred. With this added burden, business actors or users will prefer to transact on social media where there is a great chance that they will not be subject to BM.

Inconsistency with the principle of justice can actually occur by comparing the marketplace and conventional shopping centers. To attract customers, the mall held a loyalty program. At the time of registration, customers are not charged BM. Another extreme comparison can be analogous to (prospective) buyers who have just entered the mall for window shopping, they can go in and out of the mall many times without having to pay BM. Meanwhile, (prospective) buyers on digital platforms have to pay BM even though they have just downloaded the application and have not transacted. The imposition also has the potential to be applied more than once in one application, especially if the application is downloaded on different devices.

Accuracy in formulating the right BM policy must also be seen from the principle of expediency (Zweckmassigkeit) so that it is in line with the president’s directive to accelerate the development of the digital economy ecosystem. Excessive imposition of BM on T&C will actually create a barrier to entry as well as potentially cause problems both economically and technically in collecting BM. The imposition of BM on T&C does not fulfill the principle of legal certainty, because the T&C browse-wrap for the use of e-commerce sites does not have an underlying transaction, but only in the form of signs for the use of e-commerce sites. The legal terms of the agreement in the form of an agreement are also not necessarily fulfilled, because browse-wrap does not have the “I Accept” feature.

Massive collection of BM for all T&C will also hamper the customer acquisition/merchant onboarding process so that it becomes counter-productive to the goal of digital economic equity. For this reason, the best step is to apply a limited collection of BM on digital economy transactions, using a threshold policy, which is limited to documents stating the amount of money with a nominal value of more than Rp. 5 million which states the receipt of money; or contains an acknowledgment that the debt has been fully or partially paid off or accounted for.

As with the two main functions of taxes, tax policy as social, economic and political engineering is equally important as an instrument of state revenue. The two are not dichotomous functions but are intertwined and interdependent with one another. For this reason, the argument for equal treatment should not be put in the eye of a horse so as to homogenize and apply T&C as an object of BM as a whole with generally accepted tariffs. Therefore, a relaxation policy is needed in three ways.

First, the limitation of the scope of the type of T&C that is used as the object of BM. Second, the delay when the BM is owed is when it becomes a document used as evidence in court. Third, lower tariffs (0%). These three policy alternatives will support the acceleration of a sustainable digital ecosystem and President Jokowi’s political promise to prosper the people through increasing the contribution of the digital economy to the national economy.