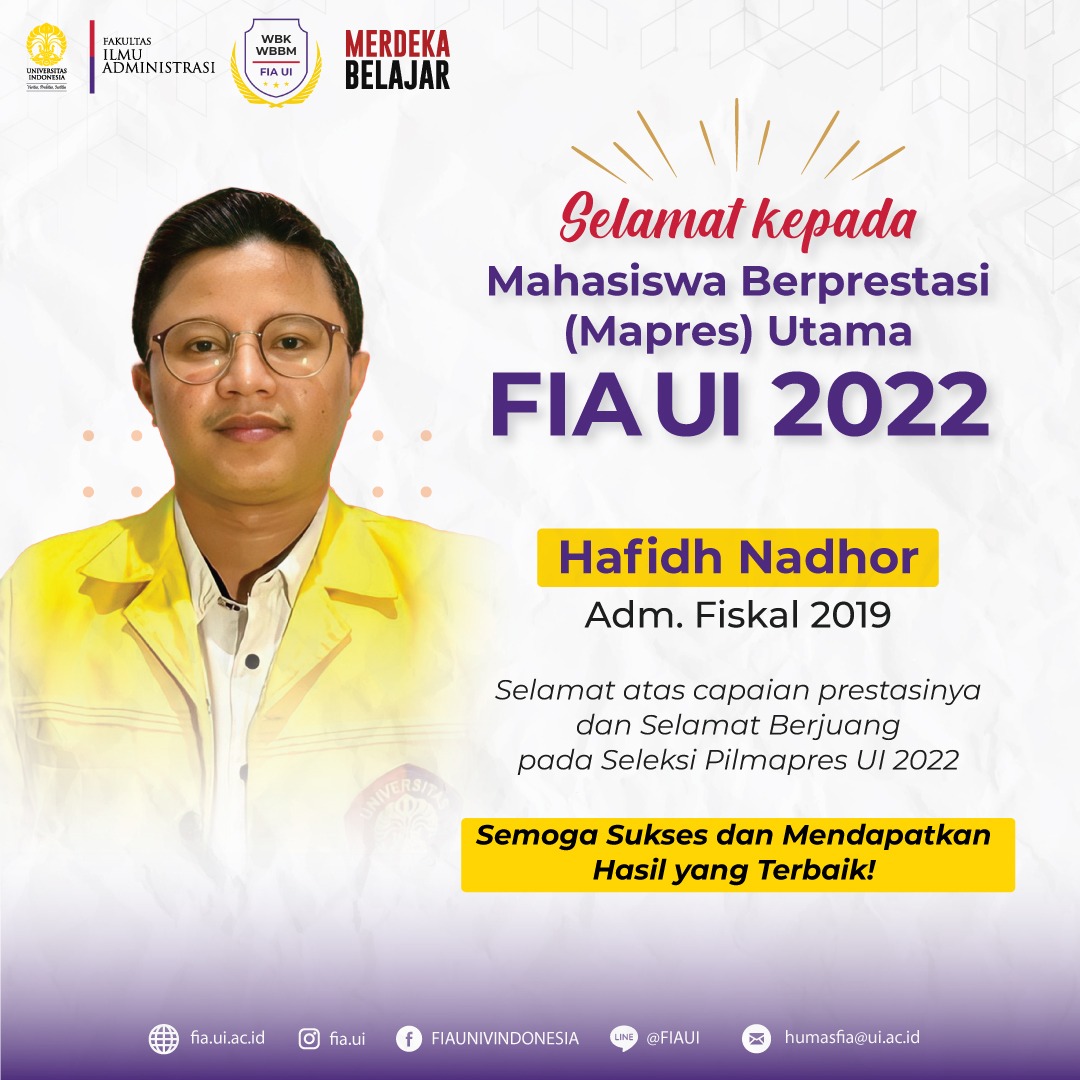 First, the most favorite outstanding student went to Hafidh Nadhor Tsaqib with a score of 83. Not only winning the favorite presidential candidate, Hafidh also managed to win the title of FIA UI 2022 Main Outstanding Student.

As an appreciation, FIA UI gave a certificate of appreciation to the presidential candidate which was given directly by the Dean of FIA UI, Prof. Dr. Chandra Wijaya, M.Sc., M.M.

“On behalf of FIA UI I congratulate and give awards to the elected presidential candidates. Hopefully this achievement can make FIA ​​UI proud and also make other friends even more excited to make achievements, “said the Dean.

Furthermore, the main Mapres Hafidh Nadhor Tsaqib delivered his victory speech by thanking all parties who had helped him in all the selection processes for outstanding students.

In his statement, he admitted that this achievement is an opportunity and pride for him because he can represent the Department of Fiscal Administration and FIA UI for the 2022 UI Pilmapres.

“Having the Mapres title is not a matter of achievement, but a responsibility that I will carry for all time. It’s hard enough to carry it, but it is a process and I will respect all the results,” he said.

Furthermore, the event ended with the awarding of certificates of appreciation for the entire committee team consisting of Finalist Training Speakers and the FIA ​​UI 2022 Pilmapres Pilmapres Jury.

The event closed with the giving of remarks by Prof. Chandra which began with giving encouragement and advice to the winners of the 2022 FIA UI Pilmapres.

“Of course it takes hard work, enthusiasm and determination to follow all the existing series. I hope for all the presidential candidates to be role models for other students by continuing to make achievements, “said Prof. Chandra.

Then, Prof. Chandra revealed that FIA UI is planning the FIA ​​UI Mapres preparatory school to prepare students to become the best students with various well-planned and well-planned preparations to face competitions and competitions in the field of achievement in the future.

The event closed with the reading of a joint prayer by the chairman of Kaifa FIA UI 2022 Muhammad Iqbal.