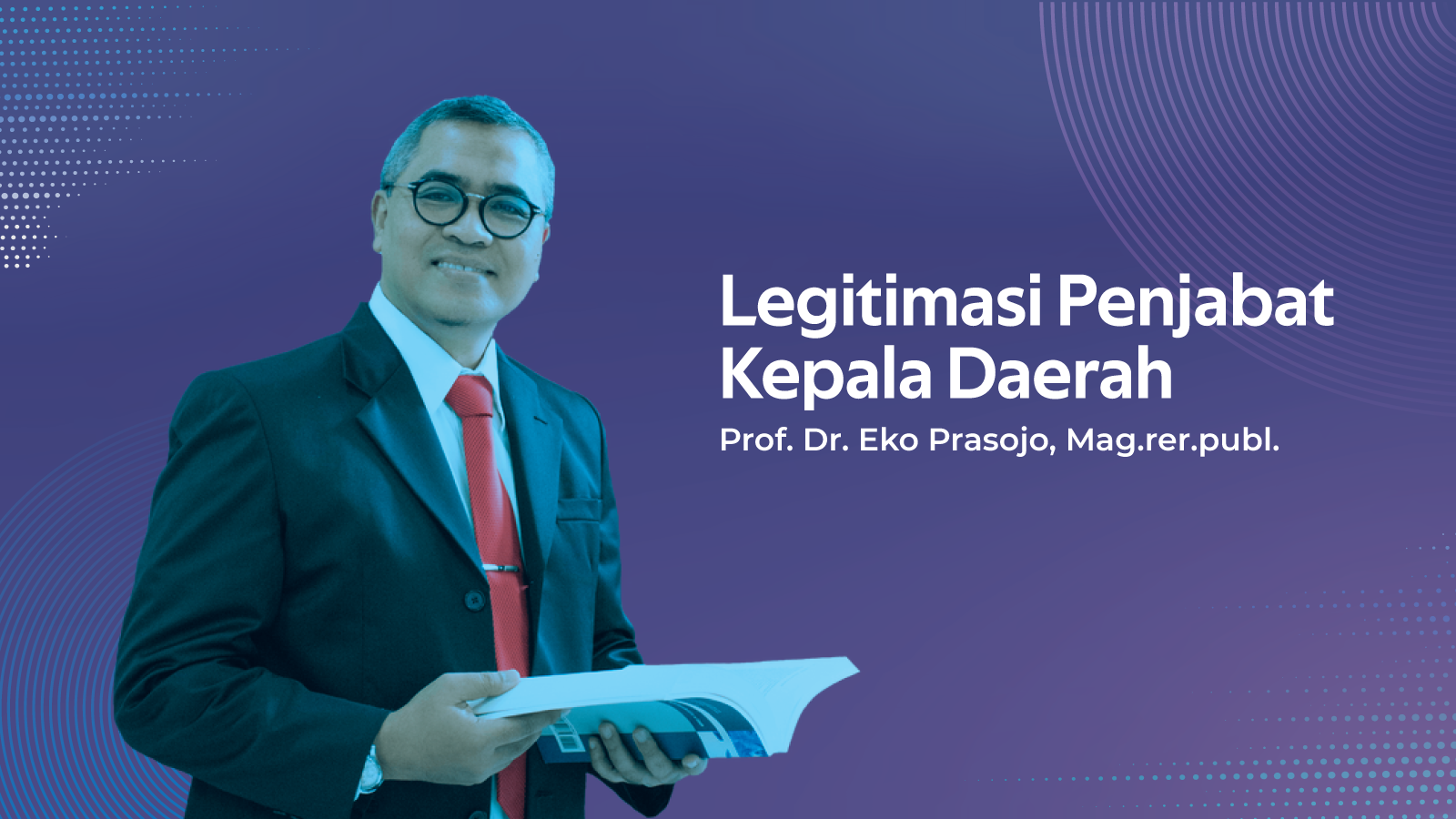 In May 2022, the filling of acting regional heads for 5 governors, 37 regents, and 6 mayors has begun.

In addition to the large number, the PKD’s tenure is also very long, namely until the simultaneous regional elections on 27 November 2024, plus some more time for determination by the Regional General Election Commission (KPUD) and preparation for inauguration. This does not include if there is a lawsuit from a losing candidate in the Constitutional Court (MK).

Thus, the total tenure of some PKDs can reach 2.5 years or even more. Never before in the history of the Indonesian government, a PKD has a very long term of office. How to see the legitimacy of the PKD in the perspective of democracy and technocracy?

Law Number 10 of 2016 concerning the Second Amendment to Law Number 1/2015 concerning Stipulation of Government Regulations in Lieu of Law No. 1/2014 concerning Election of Governors, Regents, and Mayors, gives attribution to the government to appoint provincial PKD originating from from the positions of middle high leadership, district/city PKD originating from high pratama leadership positions (Article 201 Paragraphs 10 and 11), to the inauguration of governors, regents, and mayors as a result of the 2024 simultaneous regional elections.

The appointment of civil servants (PNS) as PKD is of course motivated by the reason that civil servants have experience, professionalism in public policy and public management. This is assumed to ensure the running of the wheels of government, public services, and development.

Civil servants in their status and position as state civil apparatus (ASN) are career appointees who usually occupy positions based on career path, professionalism, and a bureaucratic merit system.

Meanwhile, the PKD because of its position as the head of an autonomous region is a political appointee who has political and government authority in the region. Differences in the status of PNS and PKD positions can lead to polemics regarding political legitimacy in the administration of local government. How is the legitimacy of a civil servant who is appointed to be a PKD, while on the other hand members of the DPRD are political officials who are directly elected by the community.

There are several problems that may arise in the context of this discourse. First, the term of office of the PKD is very long, exceeding half of the term of office of regional heads who are directly elected by the community. The length of this term of office certainly has a significant effect on the level of accountability and public acceptability of PKD. The results can be positive or negative.

In a technocratic perspective, high-ranking civil servants (madya and pratama) are people who have gone through a long process of forming knowledge and experience in government affairs. This will ensure professionalism in planning, budgeting, as well as implementation of development.

For this reason, it is possible for better government performance in the form of improving the quality of public services and high development outcomes. However, from a democratic perspective, the level of acceptability of PKD in the eyes of DPRD members and the community can certainly be questioned because they are not considered to be local people from the election results, but are considered central people.

This is certainly problematic in the political support of the DPRD and the community for various development programs. What if there is a blockade of the DPRD in the approval of the development budget for two years.

This polemic is certainly based on a positive political interest, what if the PKD, which is actually a civil servant, turns out to be able to bring extraordinary progress to the region. So, is there still a need for direct local elections to elect regional heads, if the mechanism for appointing civil servants by the central government as PKD actually proves significant regional progress. This factor is also likely to cause DPRD resistance to PKD. The aspects of democracy and technocracy in the appointment of the PKD become an interesting laboratory for politics and local government, as well as containing the risk of failure in the administration of local government.

The second problem is how to maintain the neutrality of the PKD from political intervention and co-optation. The Kompas report (18/4/2022) states that currently there has been lobbying of various groups that have the potential to become PKD against a number of politicians and political parties.

This is acknowledged by some politicians themselves. There are candidates who are ready to secure and win the 2024 General Election and support various political-business interests in their regions. The statements of these politicians are proof that the political economy dimension in the process of appointing PKD is very high and has an impact on the professionalism and performance of the government in the future.

This fact, apart from disrupting the political process in the 2024 general election that is fair, honest, and open, will also ignore the focus of quality public services to the community. PKD will find it difficult to encourage bureaucratic changes and gain local government effectiveness. Moreover, there is competition between politicians and political parties to seize the authority of the PKD, both at the central and regional levels.

Two and a half years of implementing local government by PKD will have risks. The source of risk comes from the authority possessed by the PKD to run the government for a long time with the status of “acting”.

This has never happened before and is a new thing in Indonesia. Law No. 10/2016 on Pilkada does not explicitly regulate the authority of PKD. There are three regulations that can be used as the basis, namely Law No. 23/2014 on Regional Government; Government Regulation No. 49/2008 concerning Election, Ratification, Appointment, and Dismissal of Regional Heads and Deputy Regional Heads; and Regulation of the Minister of Home Affairs No. 74/2016 concerning Leaves Outside State Dependent for Governors and Deputy Governors, Regents and Deputy Regents, as well as Mayors and Deputy Mayors.

Unfortunately, the authority of the PKD in these regulations is not explicitly stated. On the contrary, it is precisely the prohibition that is regulated, namely in Article 132 Paragraph 1 and 2 of PP Number 49 of 2008.

However, this prohibition can be excluded after obtaining written approval from the Minister of Home Affairs. Apart from delaying the implementation of policies in the regions, this also has the potential for political intervention.

The unclear authority plus the prohibition for PKD has risks, among others, indecision to make strategic decisions and policies, as stated in Law No. 30/2014 on Government Administration, namely organizational, staffing, and budgetary aspects; potential conflict with DPRD due to competition between politicians and political parties; resistance and bureaucratic resistance in the appointment of ASN positions; and stagnation of public services.

Therefore, it is necessary to make a legal breakthrough in the PP regarding the authority and implementation of tasks for PKD. The President as the holder of government power according to the 1945 Constitution of the Republic of Indonesia Article 4 Paragraph 1 can make discretion and grant delegation to the appointed PKD. This delegation is required and in accordance with Law No. 30/2014 on Government Administration.

Through the delegation of authority, the PKD can make various strategic policies and be responsible for the legal consequences that arise to ensure the effectiveness of the government. This legal basis is also important as an instrument to protect PKD from corruption. In addition, the process of PKD appointment from the beginning must be transparent with clear terms and procedures, as has been discussed by many groups. Hopefully.

published in the daily Kompas