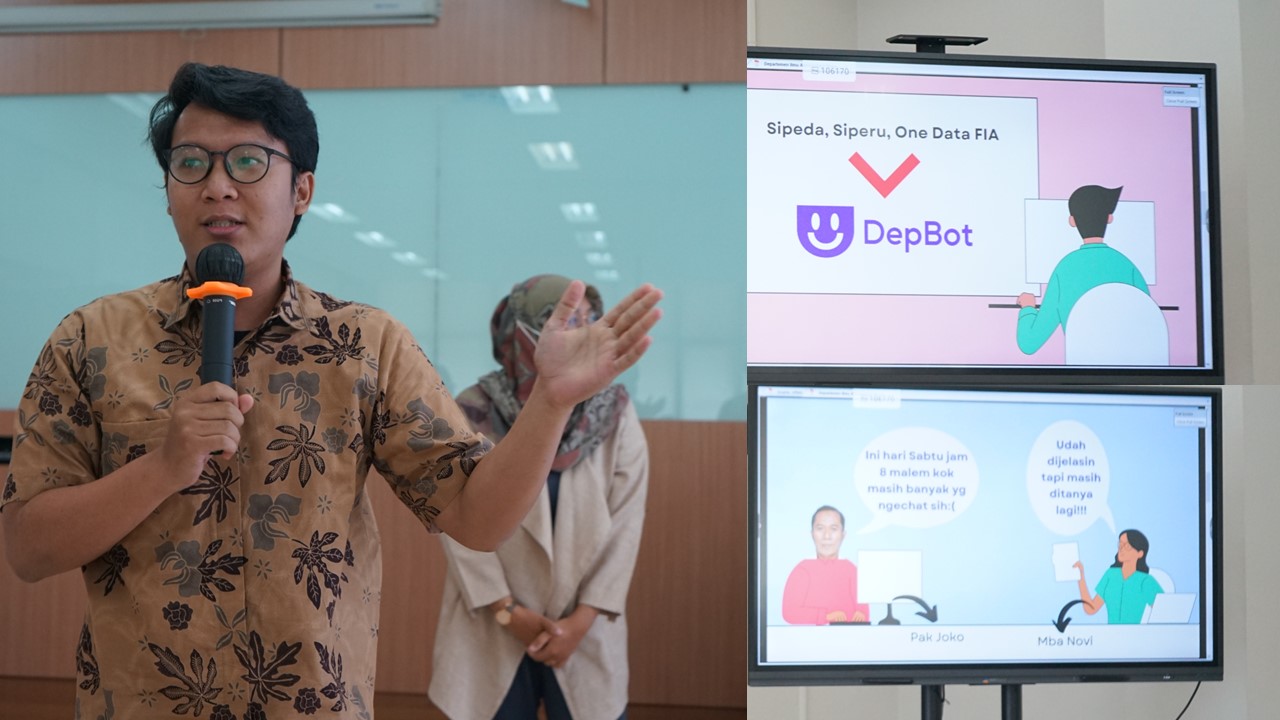 Advanced institutions are institutions that are able to continue to innovate. Innovation is a step to facilitate an agency or company in adapting to the current conditions so that it can survive and even develop in carrying out its duties and functions.

To improve the performance of Educators (Tendik), FIA UI held a Training on Tendik Innovation Ideas: Presentation of Innovation Proposals on Tuesday, August 9, 2022 morning. Each proposal is made by considering the urgency and needs of each work unit in FIA UI. In this event, there were seven groups or teams that presented creative innovations.

The first team, namely Sespim and Upma, presented the innovation of the Smile (Smart Mobile) application, which is an application that aims to make it easier for academics within the FIA ​​to access information systems through one platform; to provide fast and solid services regarding academic activities; to facilitate infrastructure units following up on requests for facility improvement; to provide information on when to fill out BKD and teaching fees to lecturers; and others.

The Human Resources Unit (HR) of FIA UI proposes an innovation called One Template FIA. OneTemplate FIA ​​is here with the aim of speeding up the drafting process and aligning the ND format and other letters in the FIA ​​UI environment. This is achieved by adding features or submenus to existing OneData FIA applications, thereby optimizing existing applications and reducing development costs.

For the knowledge of the entire community regarding FIA UI, the Department Team (Governance of Commerce, Public Administration, and Fiscal) put forward an idea called DepBot which is an automatic answering system for student and lecturer services. This service is expected to help every lecturer, educator, student, and external parties (prospective students, potential partners, etc.) to obtain information about FIA UI that they want to know with fast, precise, and accurate service.

On the other hand, the Finance and Cooperation Team carries the SIASIK-FIA (Employment Administration Information System by FIA) innovation product, which is an information system regarding staffing containing Personnel, Remuneration, and Taxation. This innovation arose because of a problem where the Dean’s Performance Contract regarding Non-Education Fees Income (Non-BP) = Target of 12 billion but the realization of 120 million; a multi-unit integrated room rental system; implementation of POB that is not optimal and there is no live tracking/update for applicants; So far, non-BP FIA has only contributed from Tax Center, LPPIA, and asset leasing; and human resources owned by the FIA ​​(Taxation, Employment, etc.). Implementation of this application is expected to overcome these problems.

The last team, namely the Infrastructure, K3L, Procurement, and Green Metric units carried the idea of ​​Green behavior innovation consisting of Green Products (creating an increase in interest in using green products in the FIA ​​UI environment), FIA GreenMetric Team (consisting of representatives from lecturers, staff, students, and security in coordination with the Green Metric unit), and the Green Character (implementation of the green character by designing and issuing a Green Metric SK). In addition to Green behavior, K3L Procurement and Green Matric also teach the FIA ​​Catalog innovation idea, which is an integrated system that can provide information to prospective providers regarding the ongoing asset procurement and purchase process at FIA UI.

Each innovation idea presented by the seven groups received input and comments from other participants and resource persons, namely Dr. Retno Kusumastuti, M.Si. It is hoped that this innovation can be applied to improve the performance of educators at FIA UI and minimize work errors that occur in the future.