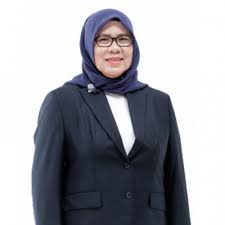 Ganefi was born in Jakarta, 1963. Her career in Badan Usaha Milik Negara (BUMN) in Indonesia has been going on for about 9 years. 9 years is not a short time to continue to develop his career and competence in the world of BUMN in Indonesia.

Ganefi received his bachelor’s degree in 1989 majoring in Fiscal Administration at the University of Indonesia. Then he continued his studies at Monash University majoring in Masters in Banking & Finance in 1994. Ganefi also participated in various training and self-development to continue to hone his knowledge and competence. In 2018, Ganefi participated in Integrated Talent Management System (ITMS) a Leader Create Leaders training, FHCI Sharing Session III “Digital Leadership”, and FHCI Sharing Session III “Talent Mobility & People Analytics in Implementation” to continue to hone his leadership.

Ganefi’s long career journey began with serving at the largest state-owned banking company in Indonesia, namely Bank Rakyat Indonesia (BRI). In 2012-2015, Ganefi was entrusted with the position of Head of BRI’s HC Division. Then in 2015-2016, he was appointed as Chief Auditor of Jakarta BRI. In 2016-2017, he served as the Commercial Director of PTPN VII. From 2017 to the present, Ganefi has been given the mandate to become Director of Human Resources and General Affairs of PT PELNI (Persero) and is also trusted to fulfill the position as President Commissioner of PT RS PELNI.