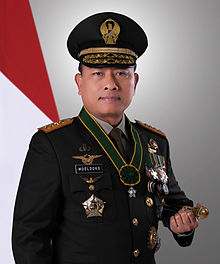 Moeldoko is a TNI General (Purn) who was assigned for the second time to become the Presidential Chief of Staff during President Jokowi Dodo, starting in 2018. His area of contribution to the Indonesian military began with becoming Commander of the 1st Infantry Division / Kostrad in 2010 and reached the peak of his career as Commander. The 18th Indonesian National Army in 2013-2015. Honors for his contribution to the military earned him various awards such as the Satya Lencana Kesetiaan XXIV.

The man who was born in Kediri in 1957 took his military education at the Indonesian Armed Forces Academy (Akabri) and graduated with the best honors pinned by the award of Bintang Adhi Makayasa. Moeldoko completed and earned a doctorate in 2014 in the Administrative Science Postgraduate Program with honors.