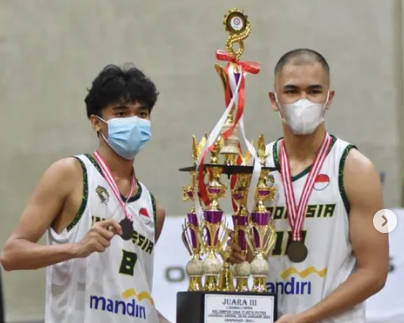 Two FIA UI students make Universitas Indonesia proud because they managed to rank third in the leading basketball event held by the 2022 Bali League. Thanks to their expertise in playing basketball, both of them have now been professionally recruited into the Bali Team to compete in a bigger and more prestigious event.

These two great students are Priyazka Rakharya Firman (Fiscal 2021) and Verrel Uziel (State 2020). Both of them are currently in the world of education in college as well as developing themselves by practicing and participating in various basketball tournaments.
“I’m currently busy studying, joining an organization, namely BEM, and busy practicing and playing basketball. Now we are also getting ready to practice for the IBF tournament in Bali,” said Verel.

Both have been familiar with the game of basketball from a young age. Verel has been actively playing basketball since he was in grade 1 of junior high school. While Arya has known this exciting game since elementary school, he started playing professionally since he was in 1st high school. The student who made FIA ​​UI proud was interested in basketball because he considered that they received many benefits, both physically and socially. “From basketball I learned many things, I learned the process from zero to get to this point. Lots of stories and benefits. I feel proud of both myself and my parents. I also get a lot of friends from basketball,” explained Arya.

Even though they are busy in their lectures, they both admit that they are able to divide their time for basketball activities with their responsibilities as students. Both admitted that lectures were the main thing and the second thing was training and playing basketball. “Initially it was difficult to balance the time. That’s the biggest challenge. However, now I can adapt, so I can divide the time between studying and playing basketball,” said Arya.

Of course, hope is what keeps both of them standing firm in every problem and challenge they face. For Verel, the biggest hope now is to be able to graduate with satisfactory grades in a timely manner and be able to bring the name of FIA UI basketball to win basketball games both at the university level and outside the university.

According to Arya and Verel, basketball personally supports their college activities significantly. The reason is, when they feel tired or stressed, they can restore their enthusiasm for learning by playing basketball. In addition, both admitted that their learning motivation also increased when they were able to make achievements in the basketball world.

“From me, for friends who are studying or who want to enter FIA UI, keep on spirit and don’t give up easily. The most important thing is to be consistent. Motivation is important, but consistency is what keeps us going even when our motivation is down. For friends who enter FIA, don’t ever hesitate because FIA ​​is really a fun, cool, and supportive faculty for non-academic activities. Don’t be afraid because all your hobbies and abilities will be appreciated, supported, and facilitated at the FIA,” concluded Arya and Verel.