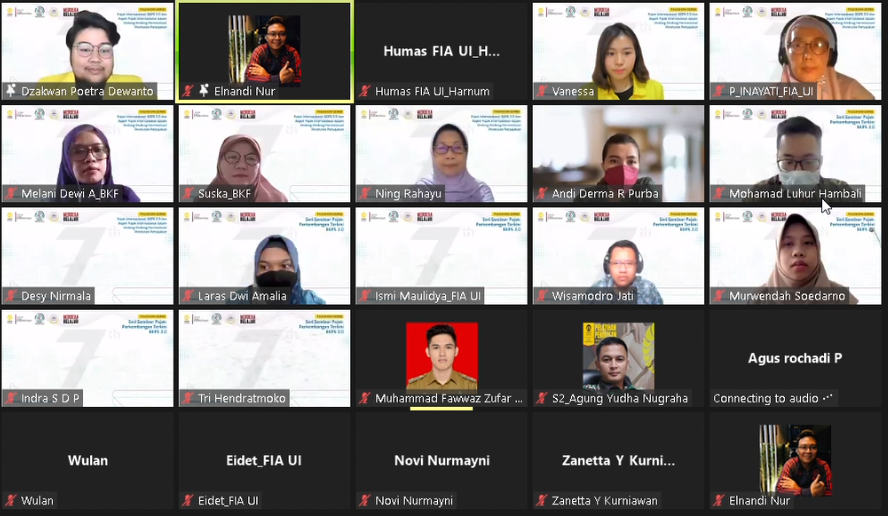 FIA UI is holding an International Tax Webinar: BEPS 2.0 and International Tax Aspects in Harmonization of Tax Regulations as one of the series of FIA UI Anniversary on Friday (18/3/2022) at 08.30 to 11.00 WIB.

The event started with remarks from the Head of the Department of Fiscal Administration, Mrs. Dr. Inayati, M. Si. Mrs. Ina said that the theme of this webinar is an increasingly important theme to discuss because there have been various developments in the world that pose challenges for all tax authorities around the world.

“In this webinar, we will find out how policy makers and academics have a perspective on fiscal policy,” said Mrs. Ina.

This event was moderated by Mr. Wisamodro Jati, S.Sos., M. Int.Tax., M.H. or familiarly called Pak Jati. Pak Jati introduced each speaker before inviting Ibu Suka to start the material. Mrs. Suska is an Associate Expert Policy Analyst at the Center for State Revenue Policy, Fiscal Policy Agency. As speaker 1, he started his material presentation session by explaining about “The Development of Pillar One”.

Mrs. Suska explained that the scope of the imposition of pillar one is MNEs with a consolidated turnover exceeding EUR20 billion and a profit above 10%. However, there are exceptions for extractive industries and regulated financial services. In addition, he also explained that the nexus or market countries that are entitled to receive revenue allocation are countries that have sales in market countries, namely EUR 1 million.

“For the allocation method, it is a portion of 25% of residual profit. Meanwhile, for certainty, use the early certainty mechanism and dispute resolution through mutual agreement procedures and the formation of a pane. Lastly, is implementation through multilateral conventions that will be signed in mid-2022 and effective implementation at the end of 2023,” he explained.

Then, the event continued with the presentation of material by the second speaker, Mrs. Melani Dewi Astuti, who is a Young Expert Policy Analyst Functional, BKF. Mrs. Melani in her material explained about pillar two. He explained that pillar two has a scope of imposition, namely MNEs of multinational companies meeting groups whose constituent entities are members of the MNE Group that have annual revenues of EUR 750 million or more in the Consolidated Financial Statements of the Parent Entity (UPE) UI within at least two of the four fiscal years. immediately before the Fiscal Year under test.

Then, the event continued with the delivery of material by Dr. Ning Rahayu as the third speaker. Mrs. Ning Rahayu is a lecturer in the S1, S2, and S3 Programs at the University of Indonesia and is also the Chair of the Academic Senate, Faculty of Administrative Sciences, University of Indonesia. He specifically explained about the implementation of pillars 1 and 2 in Indonesia. He explained that the implementation of pillar 1 in Indonesia led to the provision of taxation on digital economic transactions which was regulated unilaterally in Law No. 2 of 2020, namely the imposition of taxes on electronic transactions, the consequence was that taxes on electronic transactions could not be applied (especially for digital transactions). cross border.

Not only that, Mrs. Ning Rahayu also said that pillar 2 is not in line with BEPS (Base Erosion And Profit Shifting), especially Action 5 (Harmful Tax Practice). Because through pillar two, companies that carry out substantive economic activities and receive tax incentives, the tax incentives will be subject to tax or top up tax in the country of domicile.

After the presentation of the material by the three speakers, the event continued with a discussion and question and answer session. There are questions regarding the allocation of profit sharing to source countries.

“What is the mechanism for profit sharing to source countries that do not have BUT?” he asked.

“Indeed, it has not been agreed yet and maybe there will be further discussions. What has been discussed, the one who will coordinate is the Lead Tax Administration where the UPE is located. This has not yet been discussed and agreed upon. However, later the administrative details will be detailed again,” he replied.