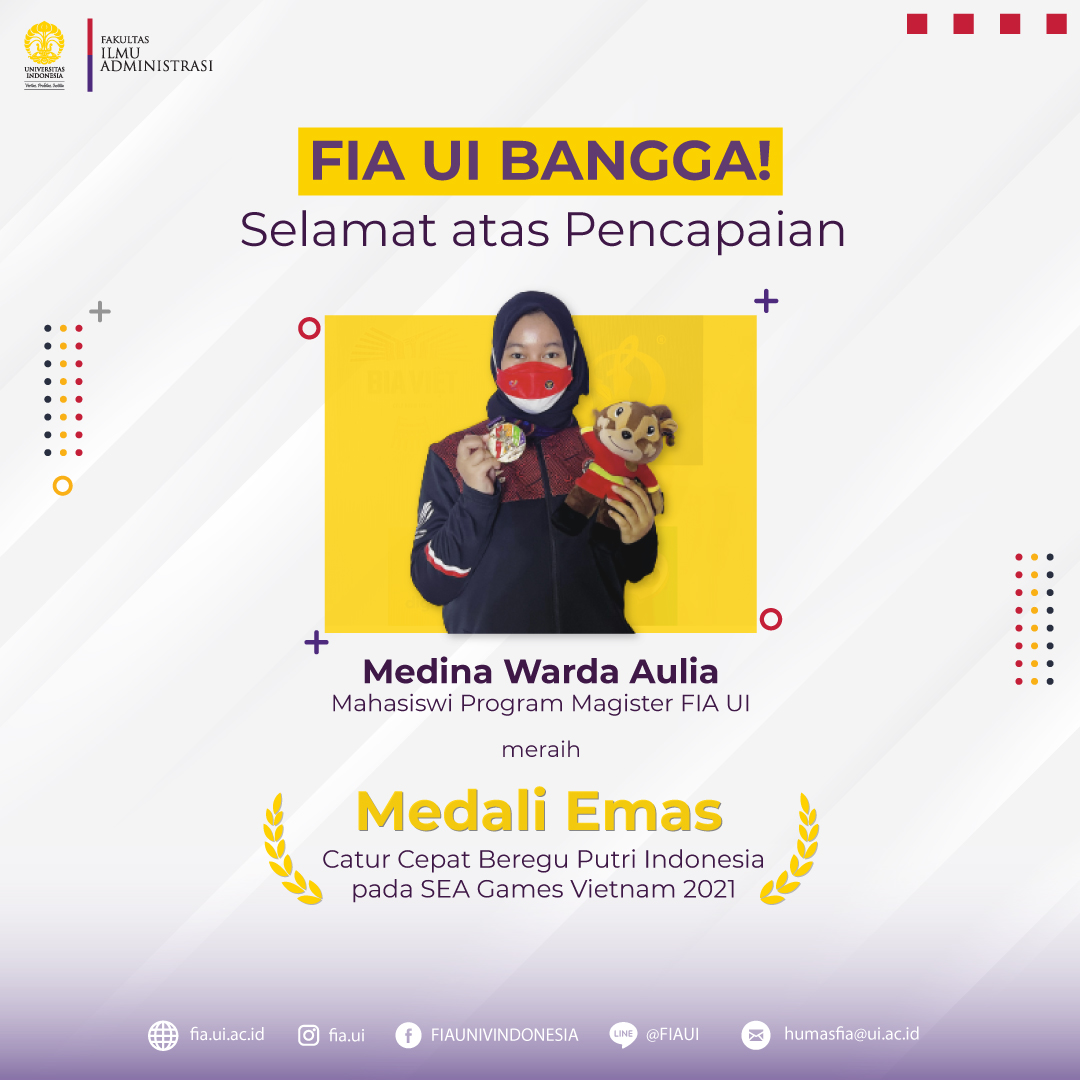 In the championship which took place on Thursday (19/5/22), Medina once again made Indonesia proud and especially FIA UI in the international arena. Medina and partner were declared victorious after winning in the calculation of Tie Break (TB) 2 from the host Vietnam.

“Thank you PB Percasi for trusting us both to be able to appear at the Hanoi SEA Games,” Medina said after the match, quoted from Antara, Friday (20/5/2022).

This victory is not the first time Medina has been able to donate a gold medal for Indonesia. Previously, Medina achieved the same achievement at the 2019 SEA Games in the Philippines.

Medina is a graduate student of Public Administration from FIA UI and is continuing her education in Master of Public Policy at FIA UI. He chose the FIA ​​as a place to develop himself because he was interested in public policy which he felt was similar to a chess game strategy, namely in making policy strategies.

“So when it comes to chess, we have to make a strategy in every step. Now, it is similar to public policy, where there must be a strategy to formulate public policies,” he explained.

Medina certainly feels her own challenges in participating in the 2021 Sea Games event, especially since she is still an active student. “The biggest challenge was that yesterday, my physical condition was not good because of allergies, diarrhea, but Alhamdulillah, I can still focus because I have a dream to fulfill.” he said.

Not only physical constraints, Medina also faces challenges in time management between lectures, training, and chess competitions. However, thanks to good time management, he was able to run all three well.

“In S2, it is more flexible to practice and arrange a different schedule from S1. If I usually adjust to the existing match schedule within the next month for example. I often pay in installments in my spare time and after that I focus on training to prepare for the match,” said the proud daughter of Indonesia.

Medina hopes that after obtaining his master’s degree from FIA UI, he can hope to improve the quality of sports in Indonesia, especially in the field of sports policy.

“Hopefully I can also graduate as soon as possible and get a son’s grandmaster. In the long term, I want to become a women’s world champion in chess. I hope so,” he hoped.

FIA as one of the faculties at the University of Indonesia certainly supports Medina in his journey to make the name of the Republic of Indonesia proud. The support shown by the FIA ​​is in the form of verbal support, as well as providing an opportunity to get a scholarship, as well as adjusting the class schedule to the competition.

“If I tell you, if you have a dream, go after it! Accompany that effort with effort and prayer. If you try and pray, I’m sure that the dream will be given by God,” he said.

For his success, all leaders and the big family of FIA UI congratulate and are proud of the achievements of the nation’s children, Medina. “Dreams are created from hard work and achievements, not a coincidence. Medina’s actions are certainly a great pride for FIA UI. Once again, I thank you very much,” said the Dean of FIA UI Prof. Dr. Chandra Wijaya, M.Sc., MM.

Prof. Chandra hopes that Medina’s achievements will motivate all FIA UI students to be more active in developing talents and making Indonesia and FIA UI proud.