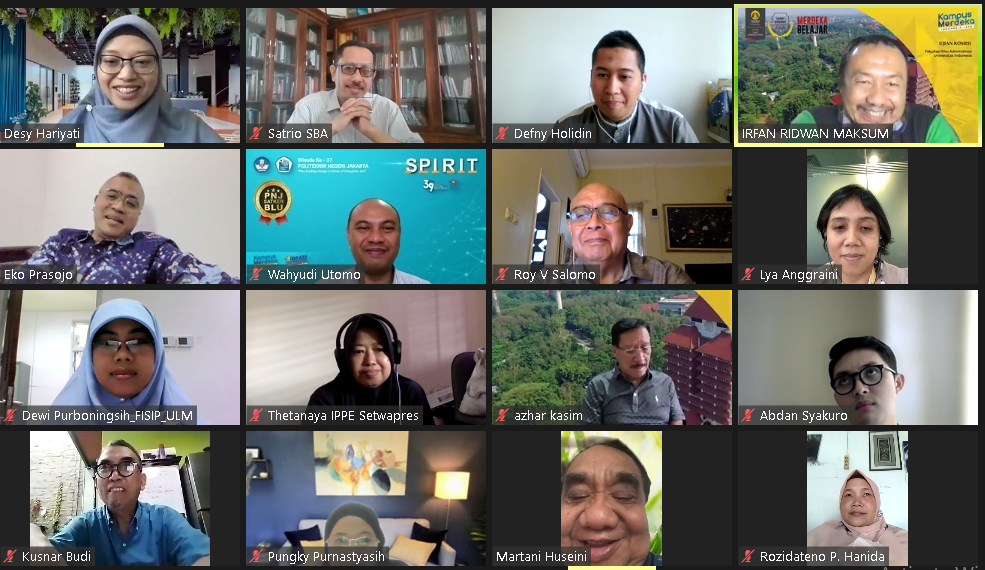 To make a popular scientific article, we must be prepared to be rejected many times.

The sentence was delivered by Prof. Dr. Irfan Ridwan Maksum, M.Sc. as Chair of the DELOGO FIA UI Research Cluster in the webinar of the Faculty of Administrative Sciences, University of Indonesia (FIA UI) with the theme “Turning Research Results into Popular Scientific Articles with Speakers” on Tuesday, July 5, 2022 afternoon.

In his presentation of the material, Prof. Irfan stated that the most important thing to turn a research result into a popular scientific article that can be brought up to the mass media is that it is actual or currently being discussed by the public and policy makers.

“Besides being actual, the composition or structure of writing popular scientific articles is also one of the important things. That is, in terms of the use of an attractive title, the composition of the contents, to the closing part, it also needs to be considered in order to attract readers to know the contents of the article that we are discussing, “said Prof. Irfan.

Then, the presentation of the material was continued by the second speaker, Prof. Dr. Eko Prasojo as Chair of the PGAR FIA UI Research Cluster by delivering material entitled “Writing Popular Scientific Articles.” Prof. Eko started delivering the material by explaining the basic keys in writing.

“The biggest difficulty in writing is starting to write. To overcome this, we need to build the habit of writing and be courageous and build a strong mentality when our writing is rejected,” said Prof. Eko.

Not only that, Prof. Eko also shared about the initial tips to be able to publish popular scientific works, namely by reading actual conditions and phenomena, paying attention to the adequacy of scientific knowledge and data to explain these phenomena, and whether many have discussed the topic.

Sitria Hamid as the Editor of Opinion Media Indonesia then presented the material entitled Opinion Articles and Writing Tips: Turning Research Results Into Popular Articles by explaining that opinion articles are articles that contain the struggles of an expert’s thoughts on problems that are developing in society.

“The steps for writing an opinion are choosing a topic that we should master, looking for references, choosing simple and logical language, determining the reader, determining the purpose of the writing,” said Sitria.

Sitria then explained things that need to be considered in writing are the use of titles, sentences, first paragraph sentences, diction, paragraphs, transitions between paragraphs, giving examples, and having to think critically. In his presentation, he also explained several examples of interesting popular scientific articles.

Then, the event ended with a discussion session where several questioners asked the speaker questions, where one of them asked about how to come up with ideas so that they could be put into an interesting writing.

The question was then answered by Prof. Eko said that usually he would write down the titles of all ideas that came to mind and also get used to reading journals or other writings. Meanwhile, Prof. Irfan answered by emphasizing the focus on the mastered theme so that he would enjoy writing more.