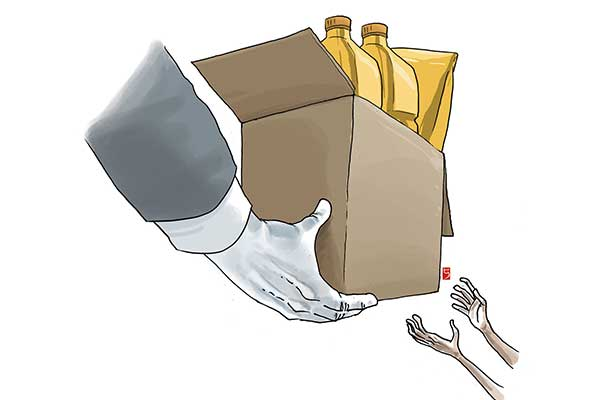 The restlessness of both housewives, fried food sellers, and rice traders is still not over. Although as of February 1, 2022, the government has imposed the highest retail price (HET) for cooking oil through the issuance of the Minister of Trade Regulation (Permendag) Number 6 of 2022, in the field the condition has not yet recovered.

People still have difficulty getting cooking oil with HET for various reasons. Since there has been no re-stock from distributors until traders feel a loss if they sell with HET because when they first bought the price was above HET. This policy is a continuation of the previous policy in mid-January, namely the one-price policy of Rp. 14 thousand per liter. This one price applies in modern markets and traditional markets, regulated in the Minister of Trade Regulation Number 3 of 2022 concerning the Provision of Packaged Cooking Oil for Community Needs in the Financing Framework by the Palm Oil Plantation Fund Management Agency (BPDPKS).

In just a matter of hours since the fixing of that one price, retail stores or modern shops were invaded by buyers and the cooking oil ran out. In some places, even up to a week later, cooking oil became scarce. The principle of economics applies, there is a demand then there is a price. The buyer finally buys according to the agreement with the seller.

Indonesia is a country with the largest oil palm plantation in the world. According to data from the Central Statistics Agency, in 2020 the area of ​​​​oil palm plantations is more than 14.6 million hectares. When compared to other commodities such as coconut, rubber, coffee, cocoa, sugar cane, and tea, the area of ​​oil palm is still far above it.

The largest is in Riau Province and followed by West and Central Kalimantan which reached 46.52%. Data from BPDPKS in 2020, palm oil production reached 51.58 million tons. The realization of exports was 34 million metric tons with an export value of IDR 321.5 trillion, or an increase of 13.6%. On the one hand, if this data is only read as numbers, the Indonesian people will feel proud. On the other hand, if you read other information, these numbers are just numbers without any impact.

As the largest foreign exchange earner for exports, ownership of oil palm plantations has been dominated by investors from Singapore and Malaysia. The selling price is controlled by Bursa Malaysia Derivatives (BMD) and domestic palm oil prices refer to the commodity exchange in the Netherlands. So, even though since 2006 it has become the largest palm oil producer in the world, Indonesia still cannot have the power to determine the selling price.

There are two philosophical approaches to decision-making that are related to morals, namely the deontological approach (Kant) and the utilitarian approach (Bentham). The deontological approach emphasizes the role of morality in terms of what is good and what is bad if a decision is made. Utilitarianism is related to a decision that is morally acceptable when an action brings the greatest welfare. Often there is a dilemma when faced with a choice of decisions, a trolley dilemma or a footbridge dilemma.

None of the decisions are right. Choosing to press a button which then sacrifices one person with the argument of saving more lives is considered to be the best option than pushing a person with a greater weight off a bridge to stop the train. Both sacrifice one person. However, in a different language: personal or impersonal. The use of language that does not carry personal or group interests will be much more appreciated.

Impersonal decisions are important in order to be able to carry morals, as Weber in The Ideal Type of Bureacracy advocates for impersonal bureaucracy, not indiscriminately or discriminating against certain groups. In the case of cooking oil, including palm oil, it is necessary to review how morality is needed in policy making, including by the government.

Who will be saved in the event of an emergency that has occurred for a long time: investors, traders, or the community? The policies made are not only in the downstream aspect, but need to touch the upstream aspect, how to manage plantations, determine the export of raw materials, and the authority of investors.

Exports of raw materials as a result of world export demand to use palm oil as a raw material for cosmetics and food raw materials also need to be reviewed when domestic needs have not been fully met.

Not to mention the unstable prices. The government can also take policies to expand coconut plantations and process coconut products to become a priority. Don’t we need to establish and prosper the nation? In order for society to function properly, a utilitarian attitude is needed from the government so that people can understand what is acceptable and morally unacceptable behavior.

Morality is about knowing what is right and wrong. If people do not understand morals and socially acceptable behavior, then they may tend to act, in ways that are unacceptable and may violate the law. Hoarding and mixing of cooking oil may continue to exist in the community. Don’t be like a hungry rat in a barn.

People find it difficult to get cooking oil because of the wrong policy from the start. Finally, it should be a policy to ensure the availability of food for the community at affordable prices, not only specifically for cooking oil. The government has also issued a HET policy for medium and premium rice in 2017.

The price was then adjusted to the situation of supply availability from farmers so that the government adjusted the HET. Commodities such as chili, eggs, soybeans, and chicken pieces are often lost and their prices are unstable. Then, what is the downstream policy model that will continue to be taken?

Lecturer of the Department of Public Administration FIA UI