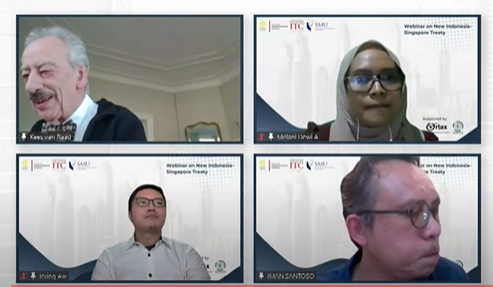 The event then continued with remarks from Prof. Sum Yee Loong who is a lecturer from Management from Singapore. Prof. Yee Leong revealed that it has been 32 years since Indonesia and Singapore signed the Double Taxation Agreement which enabled Singapore and Indonesia to increase their GDP by almost 7 times between 1990 and 2021.

After that, the event continued with the presentation of material from Prof. Kees van Raad who is Professor of International Tax Law from Leiden University, Netherlands. Prof. Kees van Raad delivered a material entitled Indonesia-Singapore Tax Agreement from a Policy and Technical Perspective in 2020 and 1990. He said that there were differences between the tax treaties in 1990 and 2020 between Indonesia and Singapore. Where in 1990, there were many deviations from the OECD/UN Model agreement. While the agreement in 2020 is more in line with the capital and implementation of BEPS.

“It’s a shame that only BEPS ‘minimum standards’ can be approved (SG restrictions). The SG restriction approach was also taken by Switzerland and Luxembourg: not by the NL rules. BEPS on Hybrid entities (Partnerships) = Art. 1.2, and in PE=Art 5 it will be very useful for ID,” he said.

Prof. Kees van Raad said that the reasons for deviations from the model in practice are often flawed due to several factors, namely for experienced countries, the provisions of agreements made by themselves are often unclear or flawed. While countries with less experience are at greater risk for error and inconsistency, treaty negotiators are not necessarily true tax treaty experts, and legislators often do not meet the standards applied to domestic legislation.

The second speaker is Melani Dewi Astuti who is an Analyst at the Center for State Revenue Policy, Indonesian Fiscal Policy Institute. Mrs. Melani delivered her material which began by explaining the background of the new Tax Agreement between Singapore and Indonesia.

“There is some background to the renewal of the Tax Agreement between Indonesia and Singapore. Namely to improve economic and trade relations; adapting to current international economic, business and taxation developments; align with international standards in the exchange of information; and provide more certainty and include anti-avoidance measures,” he explained.

There are fundamental differences in the renewal of the Singapore and Indonesia agreements, namely changes to the Individual Tie Breaker Rules; reduction in BPT rates and abolition of the MFN clause, changes in relation to interest paid or received by the government; reduction of tax rate in royalties; increased taxation on capital gains; inclusion of anti-agreement spending rules; inclusion of appropriate adjusting articles; and adaptation of the exchange of new information standards.

“Referring to Article 4 Paragraph 2, namely fiscal domicile for individuals, there are differences in the Individual Tie Breaker Rules where the old DTA only had tie breaker rules, namely permanent homes, centers of vital interest, and ordinary residences. Now, we have one additional tie breaker, namely nationalism,” Melani explained.

The third speaker was Irving Aw who is the Co-Founder, Principal, WTS Taxise. Irving explained about Outbound Investment, namely dividends which include a 10% WHT ID (if SG investors own at least 25% of the ID company’s capital) or 15%, regardless of whether the dividend is received in Singapore. This is a new thing in the tax treaty between Indonesia and Singapore.

“If for any reason dividends are not exempt from tax in Singapore, the tax credit will not account for the underlying corporate tax paid by the ID company unless previously, under the SOA section of the ITA, the requirement or 25% share capital must be met. But currently, based on Article 232. (Abolition of Double Taxation), the state capital requirement is 10% lower,” he explained.

Irving explained that there is something new in national income in the renewal of the Indonesian Tax Agreement with Singapore, namely there is a general rule where ID has sole tax rights on capital gains from the disposal of shares in SG companies, for special cases, namely companies with more than 50% value derived from real estate. SG estate, SG has sole tax rights on profits if the seller ID has more than 50% exemption company where the company does business in SG real estate; or reorganization, merger or demerger.

The event continued with a presentation from Iman Santoso who is a Tax Partner, Ernst and Young Indonesia. Iman Santoso delivered a material entitled Key to Significant Changes in the Double Taxation Agreement between Indonesia and Singapore. He explained about anti-tax avoidance where Article 6 of the Multilateral Instrument has been adopted in the New DTT by placing an opening related to the purpose of a closed tax agreement as specified in the MLI, namely the Elimination of Double Taxation in relation to taxes on income without creating opportunities for non-tax or tax reductions. through tax evasion or evasion.

“The Fiscal Domicile citizenship rule is added to the tie breaker rules to determine tax domicile. In addition, there was a decrease in the BPT rate (on profit after tax for Permanent Establishment) from 15% to 10%. Furthermore, Interest There is no change in the WHT rate for the interest which is still 10%. Also, the list of government institutions that are exempt from WHT interest has been expanded to include some quasi-government financial institutions and state wealth funds with a special list provided. Furthermore, penalties for late payments are no longer considered interest. However, the exemption of WHT interest on Government Bonds is abolished, because the conditions in the new agreement also include interest on Government Bonds/Debts,” he explained.

In addition, Iman Santoso explained that there was a reduction in the WHT rate from: 15% to 10% for royalty payments and based on Article 26 DTT only now follows the wider version of the OECD Model Tax Convention and there are no exceptions. In addition, Iman Santoso explained in Capital Gains DTT added a special article that provides capital gains tax protection in general which stipulates that the right to collect “capital gans” taxes will be limited to the domicile jurisdiction of the asset seller.

This event took place interactively and smoothly. Some participants asked questions to the speakers. One of them is the question of the importance of physical certificates in tax treaties in Indonesia.
“In Indonesia, there are many problems regarding ID cards or domicile certificates. In Indonesia, if a non-resident wants to claim a tax credit in accordance with the tax treaty, then the person must show an ID card or domicile certificate. If not, you have to follow domestic rules to pay tax which is generally 10 percent in Indonesia. However, if one day the person is able to show a certificate of domicile or COR, then the tax can be returned or changed,” answered Melani.